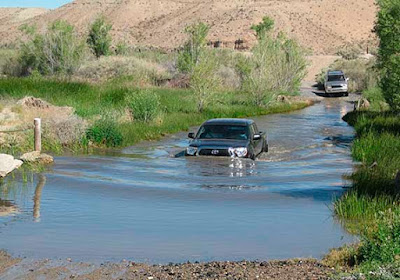 April 19, 2019. Mojave River, Afton Canyon, Deep Water Crossing. [Photo By John Marnell]
From time to time the water level in two places along the Mojave Road within Afton Canyon has become deeper than some people are comfortable driving through. There have been reports of the water running as high as 30+ inches. These two crossings are described in the Mojave Road Guide as at miles 120.5 and 121.5 – a quarter mile south of the BLM Campground.

Coming from the east, you can follow the below directions thus avoiding these potential problem areas. Those driving the Mojave Road from west to east would simply reverse the instructions. The historical and cultural significance as well as the special beauty of Afton Canyon can be enjoyed but may require a bit of backtracking. A PDF of the road log is available for download here. 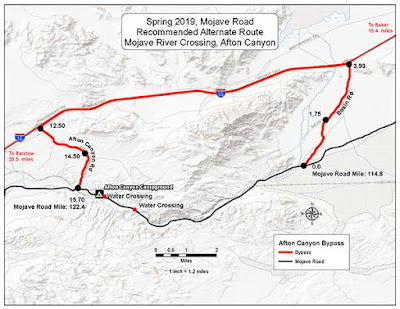 A map of the above route is available for download here.
Posted by Mojave Road at 3:17 PM

Family Adventure on the Mojave Road 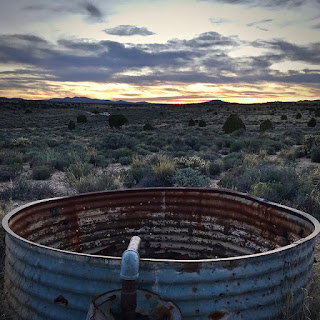 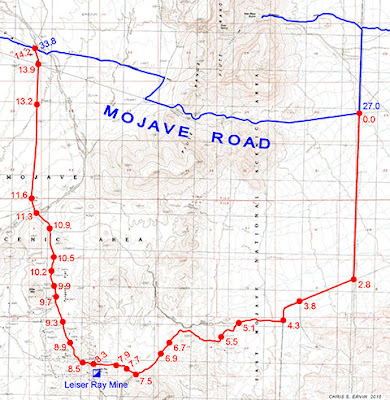 As of April 19, 2016, the National Park Service has closed the Mojave Road between Mile 27.0 and 30.5 in the Mojave National Preserve. This closure is due to a washout on the old underground telephone cable road connecting Piute Valley with Lanfair Valley. No date has been set for completion of repairs to the road.

The National Park Service recommends a 29-mile bypass on their Web page.

The Mojave Desert Heritage and Cultural Association, the publishers of the official Mojave Road Guide, have developed an alternate 14.2-mile detour for Mojave Road travelers who would prefer a shorter, more historic and scenic route. A PDF with a map and road log is available for download on the home page of their Web site, www.mdhca.org.

UPDATE: We are pleased to report that the individual discussed in this post stepped forward and apologized. We greatly appreciate his honesty and willingness to share what happened (you can see his comments below). Thank you!

We wish we didn't have to write this post. The following photos were shared by a fellow Mojave Road enthusiast who was disturbed and saddened to find someone so blatantly disrespecting and destroying something we all treasure. None of us knows who this person is, but we hope that sharing this example of thoughtless, negligent behavior will remind everyone that the Mojave Road belongs to all of us and it will only exist as long as every one of us takes care of it.

If you can't respect rules and regulations, at least find it within yourself to respect your fellow off-roaders: don't ruin the experience for everyone else. Not to mention the volunteers who put countless hours into creating and maintaining the Mojave Road for your use.

Thanks for listening, everyone. And thank you to the concerned citizen who brought this to our attention. 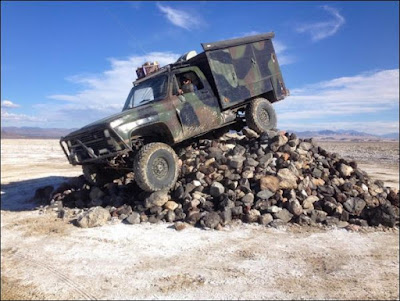 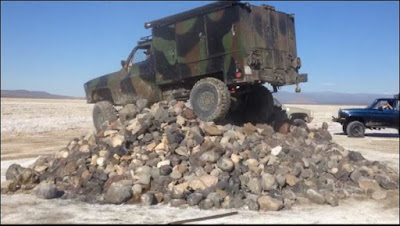 An April Trip on the Mojave Road We ran across this posting about a group trip on the Mojave Road in April that we thought we'd share since it provides a lot of good information about making the journey. Click on the link below... 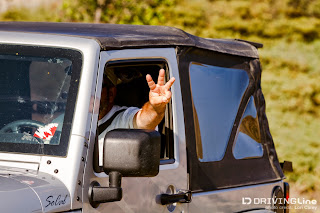 This article at Driving Line provides some great pointers for people driving the Mojave Road for the first time, and important reminders for "regulars." Be safe while you're out there having fun!
Posted by Mojave Road at 9:49 AM

Email ThisBlogThis!Share to TwitterShare to FacebookShare to Pinterest
Labels: etiquette/safety

Dramatic Afton Canyon a hidden oasis in the Mojave

Afton Canyon, Calif., between Baker and Barstow, is known as "the Grand Canyon of the Mojave."
(MIKE MILLER/SPECIAL TO THE LAS VEGAS REVIEW-JOURNAL)

One of those hidden beauty spots that delight desert lovers, scenic Afton Canyon lies off Interstate 15 between Baker and Barstow in Southern California.

Also known as “the Grand Canyon of the Mojave,” the rugged gorge carved by the intermittently flowing Mojave River is best suited to cool-season visitation. It appeals to off-highway explorers, campers, horsemen, rock hounds, photographers and wildlife watchers.

Follow I-15 south from Las Vegas toward Barstow. About 20 miles south of Baker, watch for a series of turnoffs, starting with Rasor Road, which accesses a nearby off-highway vehicle area. Keep driving on I-15, next passing Basin Road. Watch for the turnoff to Afton Canyon onto a graded road.

From the freeway, the road runs about 3½ miles to a small campground established near the Mojave River and the Southern Pacific Railroad tracks, which follow the water through the canyon. A sturdy railroad bridge spans the river near the campground, carrying trains that rumble across the desert several times a day — and night. The road may be used by all but the lowest-slung vehicles as far as the campground. Beyond the campground, explore marked routes using high-clearance vehicles, preferably with four-wheel drive.

The region is a complex of public and private lands administered by the Bureau of Land Management as Afton Canyon Natural Area. Because of its oasislike setting, running water, thick vegetation and wide variety of birds and animals, it has been designated an area of critical environmental concern. Efforts are ongoing to enhance the natural vegetation by eradicating exotic plant species and to control damage done by indiscriminate vehicle use.

Vehicle access is restricted to a few routes, including historic Mojave Road, a rough, four-wheel-drive trail beloved by off-roaders. Mojave Road follows in the footsteps of prehistoric native nomads, mountain men, early explorers and military expeditions. Other old trails into nearby side canyons may now be traveled only on foot or horseback. Although hiking, backpacking and primitive camping are encouraged, campfires outside of the campground area are restricted.

The modest campground provides several sites, available on a first-come basis for a fee of $6 per night. There is a 14-day limit. Each site is equipped with a parking pad, table and grill. Pit toilets are centrally located. Drinking water must be trucked to the site, so many campers bring their own, at least a gallon per person per day. Use a self-contained camp stove or bring firewood. You’ll need bags for disposing of camp refuse at home.

Because the campground lies well within the canyon, the night sky is very dark, except during bright moonlight. The site is popular for stargazing and watching celestial events such as meteor showers.

The Mojave River is one of those elusive desert streams that course underground most of their length. Along this part of the watercourse, however, the river and flooded streams have scoured the landscape down to bedrock and the water runs over the rocky surface.

Scenery in Afton Canyon is quite colorful and dramatic. The birds and desert wildlife drawn to the water and vegetation delight observers and photographers. Observation is most rewarding early or late in the day, also the best times for photography. You’ll want to bring your camera, spotting scope, binoculars and field identification guides.

The surrounding area is open to seasonal hunting under state regulations, but only with limited types of firearms and ammunition. Certain county and federal regulations apply. Hunters must be very careful about shooting on private land, which requires permission. No firearms may be discharged near the campground. Recreational shooting is not allowed within Afton Canyon Natural Area.

Margo Bartlett Pesek’s column appears on Sundays.
Posted by Mojave Road at 9:33 AM

Just noted this on the Mojave National Preserve Web site:

Road Conditions in the East Mojave

Severe weather has hit the East Mojave over the past couple days, so before you travel out there, you might want to confirm with Caltrans that roads are open. Currently, Highway 95 is closed from the junction of the I-40 to the Nevada state line.

Some of the roads in the Mojave National Preserve are damaged. Here's the information provided on the MNP Current Conditions page right now:

A severe thunderstorm yesterday evening washed debris onto paved roadways and damaged dirt roads. Rangers are assessing roads this morning. Travel on dirt roads within Mojave National Preserve is not advised at this time.

When traveling to the preserve via I-15 or I-40 check Caltrans' Highway Information Service for up-to-the-minute road conditions 1-800-427-7623.

Essex and Black Canyon Roads leading to the Hole-in-the-Wall Information Center and both campgrounds are severely damaged. Travel is not recommended.

BARSTOW, CALIF. – Effective May 8, 2013, Kelso Depot Visitor Center in Mojave National Preserve will be closed on Wednesdays and Thursdays.The Visitor Center will remain open Fridays through Tuesdays from 9 am to 5 pm. Mojave National Preserve's Headquarters Information Center at 2701 Barstow Road, Barstow, California, is open Monday through Friday, 8:00 am to 4:30 pm. to provide information and assist with trip planning.

Kelso Depot Visitor Center will be closing two days per week due to the impacts of "sequestration" (a series of automatic, across-the-board permanent spending cuts). The park must absorb this funding cut between now and September 30, the end of the federal budget cycle. To reach the new FY13 budget target, the park will be hiring fewer seasonal staff and consequently, will have fewer staff to support visitor services.

Although the Visitor Center will be closed, Mojave National Preserve remains open every day and has no entrance fee. Campgrounds, trails, and other facilities remain open. Hole-in-the-Wall Information Center will be open on weekends when staff or volunteers are available. For more information call 760 252-6100.
Posted by Mojave Road at 3:45 PM

Afton Canyon
If you have recent information that might be useful for fellow travelers (e.g. road conditions), you can send us an e-mail at mojaveroad@gmail.com. Have a safe journey...

Other Sites of Interest

Mojave Road
East Mojave Desert, California, United States
We created this site so there would be a place where enthusiasts can find information related to the Mojave Road. We are some of the many volunteers associated with the Mojave Desert Heritage & Cultural Association / Friends of the Mojave Road who help maintain the road for everyone to enjoy.